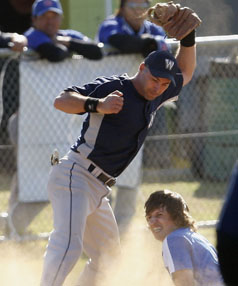 West City Wildcats won the national title – their fourth in the past five years – on Sunday, beating Howick-Pakuranga 13-9 in a thrilling finale.

“It is probably one of the best baseball games I have ever played in,” he says.

“We got ahead only for them to come back and then we shot back to take the title.”

The championship final was played in front of a noisy crowd at Lloyd Elsmore Park and in the presence of Prime Minister John Key and champion boxer David Tua.

Tua, who is fighting this month at the Trusts Stadium, threw out the ceremonial pitch.

West City got off to a good start with four runs and were looking comfortable going into the fourth inning.

But Howick-Pakuranga took control with five unanswered runs to take the lead 5-4 in the fifth.

Lotze says the move was part of a game plan.

“Matt was always on the cards to pitch,” he says.

“He has pitched against Howick-Pakuranga before and done well against them.”

Mills started to shut down the Howick-Pakuranga attack including batter of the tournament Aaron Campbell.

The west Auckland side then went on a scoring rampage with an impressive nine runs in the bottom of the sixth.

Mills continued to trouble the Howick-Pakuranga batters with his pitching and earned MVP honours as he struck out his opponents in the ninth for the win.